Over the last 40+ years in the dog training business, master dog trainer Anthony Jerone has appeared in the news many times.  His notoriety as an expert in the field of dog training has him constantly sought after by the media for his expert opinion and/or to highlight his community services throughout the New York metropolitan area as well as around the country.  His community service record is unmatched by any dog trainer in the country and his results speak for themself.  He’s also been called upon by attorneys to give expert testimony in court cases (such as dog bite cases) or to assist in court rescues (saving dogs that may be put to sleep by order of the court).  In addition, government agencies have requested his help in setting up Dog Bite Prevention Programs.  Here is a sampling of some of the media appearences he has made.

“You may as well call Anthony Jerone Dr. Doolittle.  He’s got that certain way with animals, especially dogs. But long before these happier times, Jerone counted on dogs for life and limb.

In the late 60s, he entered the military and became a scout dog and tunnel handler.  He and his
dogs were sent to Vietnam, where the dogs used their special canine abilities to

RECOGNITION LONG OVERDUE
Vietnam vet gets a Bronze Star
“Teaching his pet dog, Spotty, to do circus tricks was a pastime for

Anthony Jerone while he was growing up in Flushing. “Give me paw! Bark! Roll over!” were some of his commands. Using food as a reward, he also got the dog to stand on its hind legs. So when he was drafted for the Vietnam War in 1968, Jerone, 54, recalled, his mother advised  him to, ‘Tell them you like dogs.'”…

“Dog trainer Anthony Jerone finally got his Bronze Star yesterday, 33 years after earning it while using dogs to lead troops through hostile territory in Vietnam.

Jerone, ’54, an Army veteran and founder of the Canine Patrol program for city subways, was honored thanks to City Councilman James Gennaro (D-Fresh Meadows), who located Jerone’s  lost service records.”…

You have to show’em who’s boss.

“A dog’s natural instinct is to be part of a pack, and there can only be one leader in a pack, the alpha male,” said Jerone. “The trainer has to be that alpha male. Once the dog recognizes you as the alpha male, he has no choice but to obey.”…

WINNING A DOGFIGHT
Experts speak of dealing with wild canines “Running is not the thing to do when confronted by wild dogs, an animal behaviorist and an animal trainer said.

Anthony Jerone, who runs Anthony Jerone’s School of Dog Training & Career Inc.
(or “Doggie Boot Camp”) in Fresh Meadows, said the jogger who was attacked by strays on the boardwalk in Far Rockaway the day after Christmas became a moving target and “prey for the pack-which included pit bulls, a rottweiler and two mixed breeds.”…

PARK IS GOING TO THE DOGS
Dog run for Cunningham Park gets the green light, for now

“Anthony Jerone was only 5 years old when an aunt gave him his first dog, a cocker spaniel he  calledSpotty.  “He was my best buddy for 10 years.  We lived in a tough area in Flushing where people wanted to tofight and he protected me,” he said.  For Jerone, 51 an MTA motorman, it was the start of a lifelongfriendship with dogs, animals that he has trusted with his life more than once.”…

Who Let The Dogs Out?

Is man’s best friend becoming our worst nightmare?
In recent weeks the news of dog attacks has made local and national headlines and has led many to wonder why dog attacks are becoming more frequent. But what is really driving these animals to injure and kill? 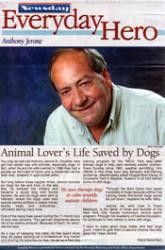 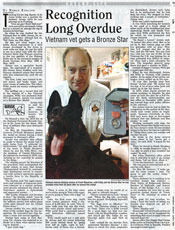 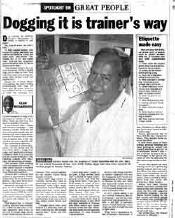 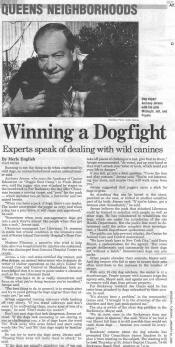 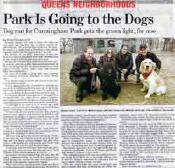