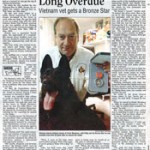 RECOGNITION LONG OVERDUE
Vietnam vet gets a Bronze Star
“Teaching his pet dog, Spotty, to do circus tricks was a pastime
for Anthony Jerone while he was growing up in Flushing.

“Give me paw! Bark! Roll over!” were some of his commands.
Using food as a reward, he also got the dog to stand on its hind legs.

So when he was drafted for the Vietnam War in 1968, Jerone, 54, recalled, his mother advised him to, ‘Tell them you like dogs.'”

He did, and what began as a hobby found expression in a skill Jerone developed in the Army to work with war dogs.  He put the skill to use as a point man with the 43rd Infantry
Scout Dog Platoon scouting in the rice paddies of the Mekong Delta and in the mountain jungles of South Vietnam from May, 1969 to May, 1970.

Jerone was a specialist fourth class, the equivalent of a corporal.  His closest Army buddies were two German shepherd scouts that served with him consecutively, each for six months.

The first, Lobo, was trained to detect mines and booby traps, and warn troops of ambushes.  The other, Willy, nosed out enemy underground tunnels.

For sniffing out a tunnel that led to the capture of a key Vietcong strategist, Willy was promoted from PFC to corporal.  Jerone was awarded a Bronze Star Medal.

Jerone had to wait for more than 30 years, however, to receive his medal.

He blamed a July 12, 1973 fire at the National Personnel Records Center in St. Louis for
the delay.  Millions of military files were destroyed in the fire.

On May 28, Councilman James Gennaro (D-Fresh Meadows) pinned the medal on Jerone during a brief ceremony in Gennaro’s office.

Jerone was satisfied that efforts he made to obtain the medal had finally borne fruit.  “I achieved my achievement,” he said the next day at his home in Fresh Meadows, where he run Anthony Jerone’s School of Dog Training & Career Inc.  He started the business in
1973, capitalizing on the expertise he gained in the Army.

The citation issued “by direction of the president” that accompanied the medal stated, in part, that Jerone “distinguished himself by outstandingly meritorious service in connection with military operations against a hostile force in the Republic of Vietnam.”

“His loyalty, diligence and devotion to duty,” the citation added, “were in keeping with the highest traditions of the military service and reflect great credit upon himself and the United States Army.”

Jerone credits his own skills and those of his combat dogs for the recognition.  He recounted how they became a team and served together.

During boot camp at Fort Benning, Ga., Jerone was required to indicate on a form what special training he desired.

Lobo, his first scout dog, could scent enemy presence from a distance of 2,100 feet, he said.  “You always walk your dog into the wind.  The wind carries sound and scent.”  Willy could find a concealed tunnel and determine different tunnel depths.

Willy would mark out a safe path for Jerone and the troops following 500 yards behind them by “going from left to right, right to left,” Jerone said.  If there was a tunnel, mine or
booby trap, he would sit at the spot to indicate danger.

“They’re trained not to bark,” Jerone said.  “When the dog sits, everybody hits the ground. Everything depended on the dog.”

“The dogs were so effective,” he said, “the Vietcong placed a bounty on them.  There was a $100 reward for a scout dog’s ear that was tattooed with its identification number, and they’d get fifty bucks for my shoulder patch that said ‘Hell on Paws.'”

Lobo worked for six months then contracted “bleeders disease,” a condition in which the white corpuscles are diminished, Jerone said.  Lobo had to be euthanized, but he had done his duty.
“He stopped us from walking into a couple of ambushes,” Jerone said.

It was while searching for tunnels in the sand at a beach about 12 miles south of the demilitarized zone separating North and South Vietnam, that Willy performed the feat for which he was promoted and Jerone honored.

“He found a tunnel,” Jerone said.  “It looked like plain sand.  But as he sat by it, this woman pops up with two grenades with no pins.  They [the U.S. troops] shot her in the face, and she fell back.
The guy that was with her was one of the 10 top Vietcong the U.S. was looking for, so they promoted him [Willy] to corporal.  They had a little ceremony for him.  The brigadier general came down and gave a citation to Willy.”

Instead of doggy C-rations, Willy got a hamburger that day.

When he was discharged, Jerone left Willy in Vietnam with another soldier.  As he spoke of his canine colleague, tears welled up in his eyes.

“It was like leaving your best friend,” Jerone said.  “My sanity was the dog.  A lot of guys came back and ended up in the nut house.”

In 1973, when Jerone started his canine academy in Bayside, he also came up with the idea for a K-9 Patrol the Koch administration put into effect in December 1980, teaming trained dogs with police officers in the subways.

But Jerone said he had to fight for recognition as the author of the idea, which took seven years to implement, “because everybody at City Hall only knew dogs as four-legged
animals that eat, defecate and bite people,” he said.

Working constantly with dogs, the longed-for Bronze Star Medal was never far from Jerone’s mind.
He has counted almost to the hour the time he waited for it: “Thirty-three years, two months and one day,” he said.

He wrote to the Army several times about it but “never got a reply,” he said.  Still, “I hoped for the best.”

When he moved to Fresh Meadows in 1996, he sought Gennaro’s help.  “I was able to prove I was awarded the medal,” he said.

But when Gennaro’s office called him in mid-May to pick it up, Jerone told them, “Let me think about it.”

“I was too emotional,” he said.

“He was just so overwhelmed by it”.

Three students he is training to be certified master dog trainers – Peter Giglio, of Ridgewood; Shirley Smoker, of Holbrook, and Joanne Bruno, of Old Bridge, N.J., – were at
his academy the next day to congratulate Jerone, known as “Uncle Tony” or “St. Anthony” to many of them.

“I’m glad; it’s long overdue, because I have the honor of seeing my teacher who inspired me, get it,” Giglio said.

Bruno said: “I think it’s sad you have to wait so long and not be recognized for something that saved so many lives and was well deserved.”

Jerone offers free Doggie Boot Camps to the public on Sundays from 1 to 4 p.m. in Crocheron Park in Bayside.  Pooches are taught to heel and sit.