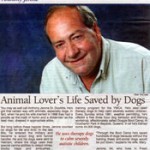 You may as well call Anthony Jerone Dr. Doolittle. He’s got that
certain way with animals, especially dogs. In fact, when he and

his wife married in 1998 they had a poodle as the maid of honor
and a doberman as the best man, dressed in appropriate attire.

But long before these happier times, Jerone counted on dogs for
life and limb. In the late 60s, he entered the military and became a scout dog and tunnel handler. He
and his dogs were sent to Vietnam, where the dogs used their special canine abilities to detect
mines, booby traps and ambushes… ultimately saving many lives.

One of the many lives saved during the 11 -month tour of duty was Jerone’s. “Two german
shepherds alerted me to an enemy ambush. Because of them, I’m alive,” Jerone says.

As a way of repaying that debt, he has spent more than 40 years working as a professional dog
trainer and sharing his expertise for free. He set up a free dog training program for the YMCA. He’s also used therapy dogs to help calm severely autistic children. Every Sunday since 1991, weather
permitting, he’s offered a free three hour dog behavior and training workshop, affectionately called
Doggie Boot Camp, in Crocheron Park in Bayside, Queens. In all he’s trained some 44,000 dogs.

“Through the Boot Camp he’s saved hundreds of dogs because without the training these anti-social dogs would be put down.

Jerone, 54, who lives in Fresh Meadows, is the father of three and founder of the New York City
Transit Authority’s canine patrol program. Through Anthony Jerone’s School of Dog Training &
Career Inc., he continues to train others to work with dogs.

“I want to make good dogs better, and bad dogs good. I want to give them a second chance like they gave me,” says Jerone.