My career as a Professional Dog Trainer started in 1968, when I entered the
Military and I was sent to their  Dog Training School in Fort Benning, Georgia

for three months. There, I was taught how to evaluate, train and handle
scout dogs in obedience, agility and scent discrimination. After the dogs and
I received our intensive 6 hour/day, 6 day a week training, I became an Army
infantryman, scout dog and tunnel handler. I was an expert in handling
these dogs to use their scent discrimination abilities to detect mines, booby
traps and ambushes in order to save human lives.


Upon successful completion of this intense dog training program, the dogs
and I were sent to Vietnam for 11 months to save human lives. While I was
in Vietnam, I trained and worked my dogs on a daily basis almost 24 hours a
day. While in Vietnam, I was also taught how to train and handle various
other scent discrimination dogs, such as Tunnel Dogs, Narcotic and

In addition to handling these dogs intelligently, for their various purposes, I
was required, on a daily basis, to reinforce their obedience training, as well
as their agility training and scent discrimination training. The dogs that I
trained and handled saved many human lives, including my own. This is why
I later got involved in saving dogs lives when back in the States. This was
and is my way of repaying these dedicated canines for saving my life as well
as the lives of my buddies in the military. One of the dogs that I trained and
handled was even promoted to Corporal for his outstanding find of a
Vietnamese who was on the U.S. Military’s top Ten Wanted List.

I was honored with the Army Commendation Medal, the Bronze Star, the
Conspicuous Service Silver Cross, the Combat Infantry Badge, the Army
Achievement Medal, the Presidential Unit Citation, and the Vietnam Civic
Actions Medal for my service and expertise as a K-9 Corp. Specialist in
Vietnam. 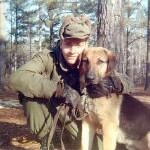