Anthony Jerone.
(11/11/04) at Saint John’s University with a unique and very
special one of a kind proclamation.

The proclamation was given to him by Councilman James Genaro
on behalf of New York City and the nation for his “extraordinary services and
distinguished  contributions to NYC and our country.”  He is touted
as “one of our country’s preeminent professional dog trainers”.
Anthony was again praised for being “the founder of the K-9 Corp for the Transit Police …
which has made our City’s streets safer”

This proclamation was presented to Anthony at a ceremony

in the presence of   Saint John’s University officials, the
uniformed Military,  the Marines,  VFW members and a
memorial  display to the  fallen soldiers in Iraq.  It was a very
moving ceremony and the presentation of  the proclomation
to Anthony was the highlight.

The Council City of New York
PROCLAMATION
Whereas: 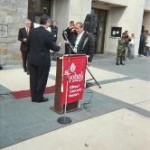 Whereas:
Today we are immensely proud to honor Anthony Jerone,
one of our country’s preeminent professional dog trainers
and a man whose contributions to our City and nation have
been  particularly distinguished; and 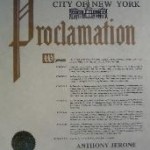 Anthony Jerone began his career in 1968 after entering the
military. At the Army’s Dog Training School in Fort Benning,
Georgia  Mr. Jerone learned how to evaluate, train and
handle scout dogs in obedience, agility and scent
discrimination;  and

Whereas:
Anthony Jerone then became a United States Army
Infantryman, scout dog and tunnel handler, and was sent to Vietnam for         View
11 months where he and his special dogs saved numerous lives.
Mr Jerone was so successful in training and handling these specials canines that one of
his dogs was even promoted to Corporal for his outstanding find of a Vietnamese who was on
the U.S. Military’s Top Ten Wanted List; and

Whereas:
For his distinguished service as a Vietnam K-9 Corp. Specialist, Anthony Jerone was
honored with the Army Commendation Medal, the Bronze Star, the Conspicuous
Achievement Medal, the Presidential unit Citation, and the Vietnam Civic Actions
Medal; and

Whereas:
Anthony Jerone is also the founder of the K-9 Corp. for the NYC Transit Authority police.
This program, which he implemented in 1980, enables police officers to have highly
trained canine partners; it has not only saved the lives of police officers but it has also
made our City streets safer by increasing the apprehension of criminals; and

Whereas:
The loyalty, diligence and devotion to our country that Anthony Jerone displayed as a
soldier  are the same qualities that have helped him achieve such great success in his
personal and   professional life. He is a true credit to all the brave men and women who
have been fortunate  enough to serve our country, and it is with the deepest gratitide of
his legislative body that we honor him today; now, therfore be it known:

That the Council of the City of New York commends ANTHONY JERONE for his
extraordinary service to our City and Nation.

Signed this 30th day of September in the year Two Thousand and Four.